Winter Garden Records is a label that goes beyond what any other label has done. All the releases have been individually cut by hand via lathe machine by sole owner and operator, Spider Death, who you can find out more about on the MONT ICONS podcast episode, “Punk Tattooist Spider Death on Fanaticism”.

In this interview with Spider Death, we find out more about the starting the label, the highs and lows of breathing all the plastic fumes from long hours at the lathe machine, the blood sweat and tears in painstaking detail of the art, but the glory and external appreciation of the final product (regardless of the eshays).

A DIY punk label is a labour of love in itself.

In your own time, you organise the tracks and investing your own money into getting the records pressed. Then you have to coax the artwork out of the artist, pick the perfect stock thickness for the covers, organise the printing, do the insert yourself (because the band just isn’t getting back to you), approve the test press, pack the finished vinyl into the covers and sleeves. As well as put the songs online and contact record stores and distros that might be interested in taking a few copies.
You have to convince the world that the songs are worth listening to and worth purchasing on vinyl! Amongst a whole list of tedious and frustrating things that you hope ends with some sort of satisfaction or at the very least, getting your money back

Read on - and if you haven’t listened to that episode of MONT ICONS, give that a listen afterwards 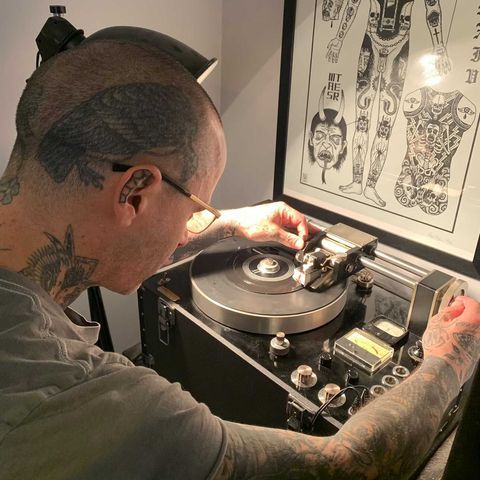 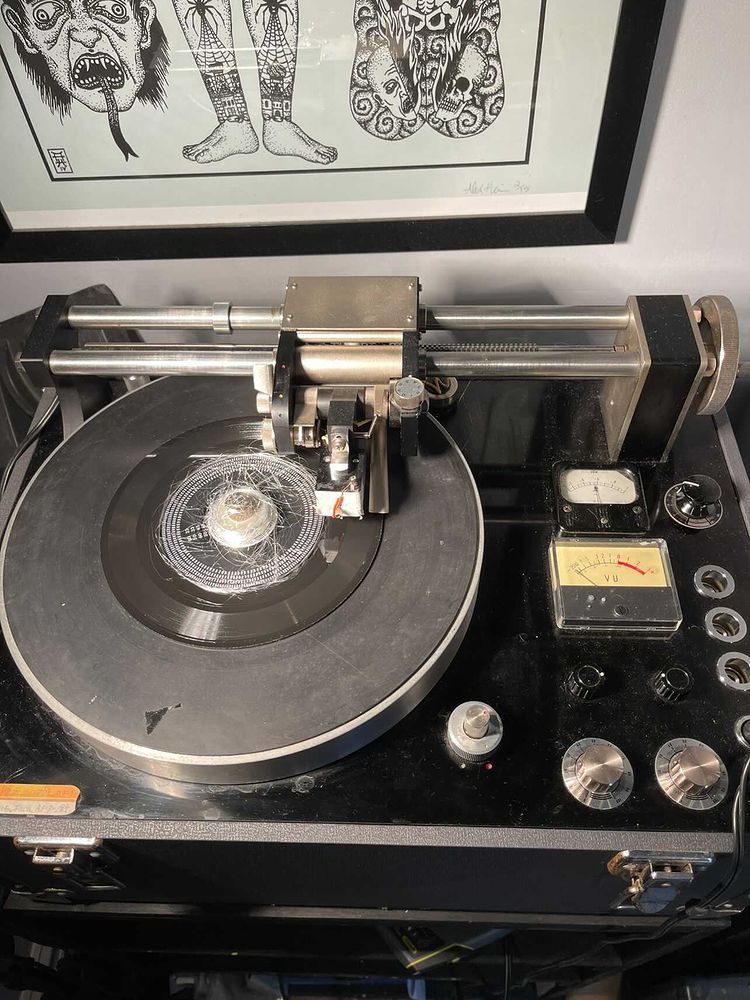 LM: What was the debut Winter Garden release? From what did the necessity to take the extra step and start cutting your own records come from?

S: The first ever release was the Death Church “Tape Worm” 7”. Side-A had the track “Tape Worm” and the flip side had a dance remix of one of our songs by “Muscle Memory”. Originally, I planned to make 66. I bought 150 blanks and, in the end, only about 33 came good, and even still they were pretty busted up. Some of the A sides were good and B sides bad so I glued them together. It was a warzone of a release. Each cover I printed at home too, with a Gocco Riso.

It was a special “gig only” release, for The Vampires Ball. We started playing heaps of goth shows which was really cool. Most of these people never went and saw shows - strictly DJ nights. I don’t remember who else played - most of Death Church was a ferocious depressing blur.

I started cutting records just because I wanted to take that extra step of DIY / control. I like the fact I can put out whatever I want, however I want, and people will buy it .... fast too hahah

LM: Where did you source the lathe cutting machine from? I feel like it’s not something you’d see every day on Facebook marketplace…

S: Before I bought it and realised I wanted to be involved, I asked my buddy Mega Mike in Perth for help. He had released lathe cut record for bands I was in, in the past, so we had a little history. He told me to research as much as I can and consult the holy grail - “The Secret Society of Lathe Trolls”, which is an online forum.
After lurking and asking questions for a few months one came up for sale. A bloke in Brisbane. I got really lucky – expensive yes, but I got a good deal. I had to buy a new diamond stylus, blanks, mixer, heat lamp, digi temp and a bunch of other stuff. I didn’t really get it kinda right til the 3rd release, and I feel I didn’t purely master it until the 20th release - 100 percent. Like anything it’s a learning curve, I would rather keep pushing than coast on some bullshit.

LM: What’s been the hardest release to date and why?

S: Probably the Enzyme release. Mixing issues, snapped a diamond, blank records got lost in the post, lathe belt snapped, couldn’t find right paper for cover due to covid, artwork outta rego... still it became one of the best to date. Respect to the ‘zyme dogs. Another one to mention would be the Lowlife / Death Church 7”. It came out during first wave (of Covid) so there was literally a shortage of blanks worldwide. The plastic I cut on is the same you see in shops and public places as barriers. I had to settle for these ratty 0.5 Flexi things for half the run. The centre hole on all of them was too small so I had to carve each one with a scalpel . Cut my hand numerous times. The super thin records also warped bad - sorry if you copped one. But I doubt you even play it ....

LM: What’s the biggest lesson you’ve learnt in regard to cutting your own records? For those who have ever considered doing something similar

S: Don’t count your chickens before they hatch.

Whether the amount made or money made. “Everything is a bonus” is the best way to look at it. I get one guy hit me up for info every time I release a record, which is fine - happy to help a newbie troll. But just head out and read about it first - easy to get burned and easy to get dogged.

LM: You literally do the whole process from start to finish of putting out a record. What would you say your favourite part about it is? If you could cut out one bit what would it be?

S: To be honest I love everything from cutting them, drawing the artwork or figuring out how I’m going to make this release unique. I think the best part is the month lead of OG me just working it all out in my head, the design, package, numbers, over and over ...The worst part is when it’s sale time - it’s over in minutes. Kinda like post show blues. All that hard work gone and all you got left is some busted eshay asking for tracking for his Oily Boys 7”.

LM: Winter Garden put out a large number of releases in 2020 compared to previous years. When covid hit, you went from spending the majority of your time tattooing to being at home and using projects like this to fill the time. How did you deal with the change? Which do you prefer?

S: I hadn’t really cut for two years because all my stuff was in my apartment in Kings Cross! Luckily, I got it all down here just before the virus kicked off. Covid was hard for the lathe trolls - like I mentioned the shortage of blanks!

I had a secondary lathe that didn’t work I actually traded for blanks during covid. I have felt more of a balance now, there is no deadline that I place on myself and Tessa and I aren’t praying that this next military scientist record comes out soon so we can eat. I also made artwork, zines and other stuff to survive during covid. Cutting records is great but all that heat and acetone fucked me up. I used to pull 8-10-hour day in 4-day blocks. Now I’ll just do 8 hours one day and a couple hours here and there in the mornings or at night.

LM: Tell me about the releases you have coming up, particularly your collaboration with Mont?

S: Ok, DX and Mahmood asked me to submit a bunch of pics for a zine. They were going to make a zine for every guest originally but I think the others flaked. I thought we should have a record with it! Just an excerpt from the (MONT ICONS) podcast. Side-A talks about young spider / Gism. Side-B deals with tattooing etc. I’ve made a bunch of fan art and DX has written a bunch of stuff, it’s coming along well. As an homage to Sakevi, the zine has transparency cover, double image and various paper stock out of respect for the book he just released . I sent him a preview and he backs it. So I wasn’t he getting stabbed in the near future, by him anyway, haha 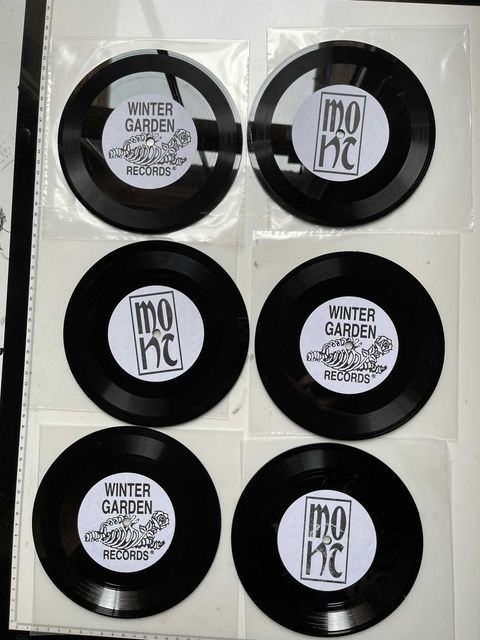 LM: What other creative projects do you have going on that people should check out?

S: So I’m actually not cutting again until June. Apart from MONT ICONS. I’m working on a massive art show - a duo show with Ed Woodley at China Heights . The show is based around “State Control”. I’ve recreated soviet propaganda posters with a punk vibe. Along with that, another series of standard sit drawing I make that everyone likes.

But wait there’s more: there will be a record available at the show! I’m putting out a split 7” LOW LIFE / Schkeuditzer Kreuz - covering “State Control. It’s a wild record. With some bonuses - stay tuned.

Only available at the show - even the members will have to leave Instagram for this one. 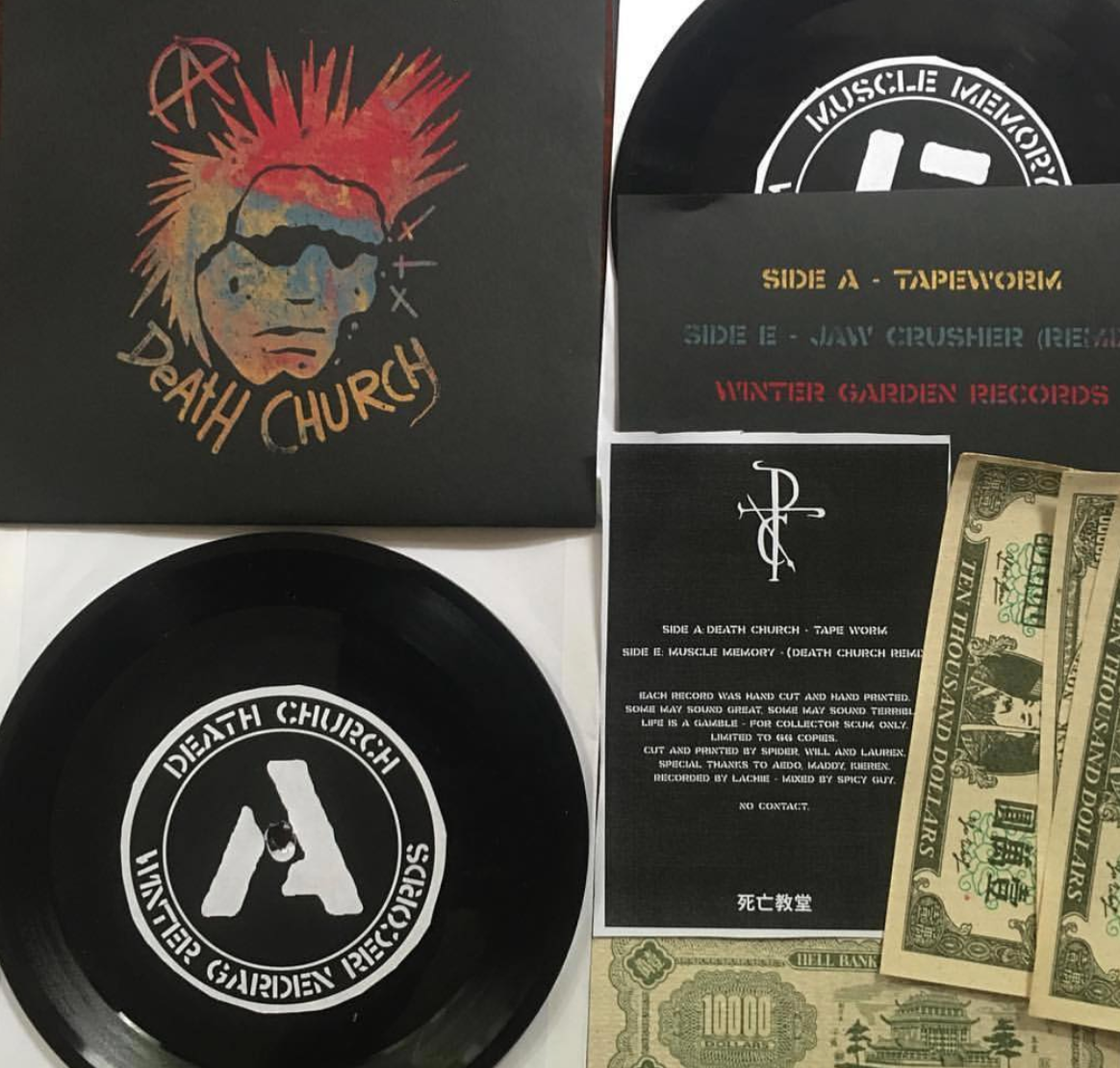 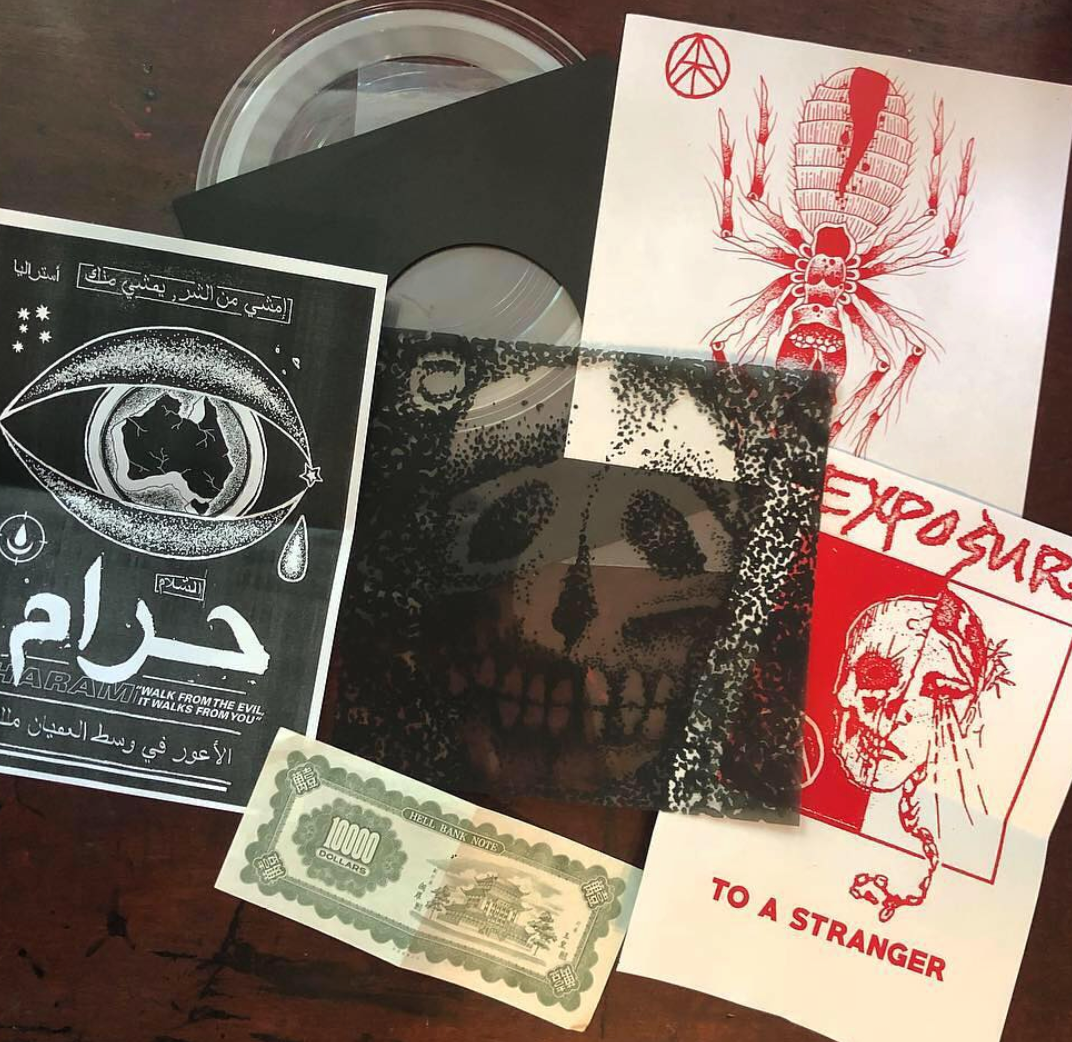 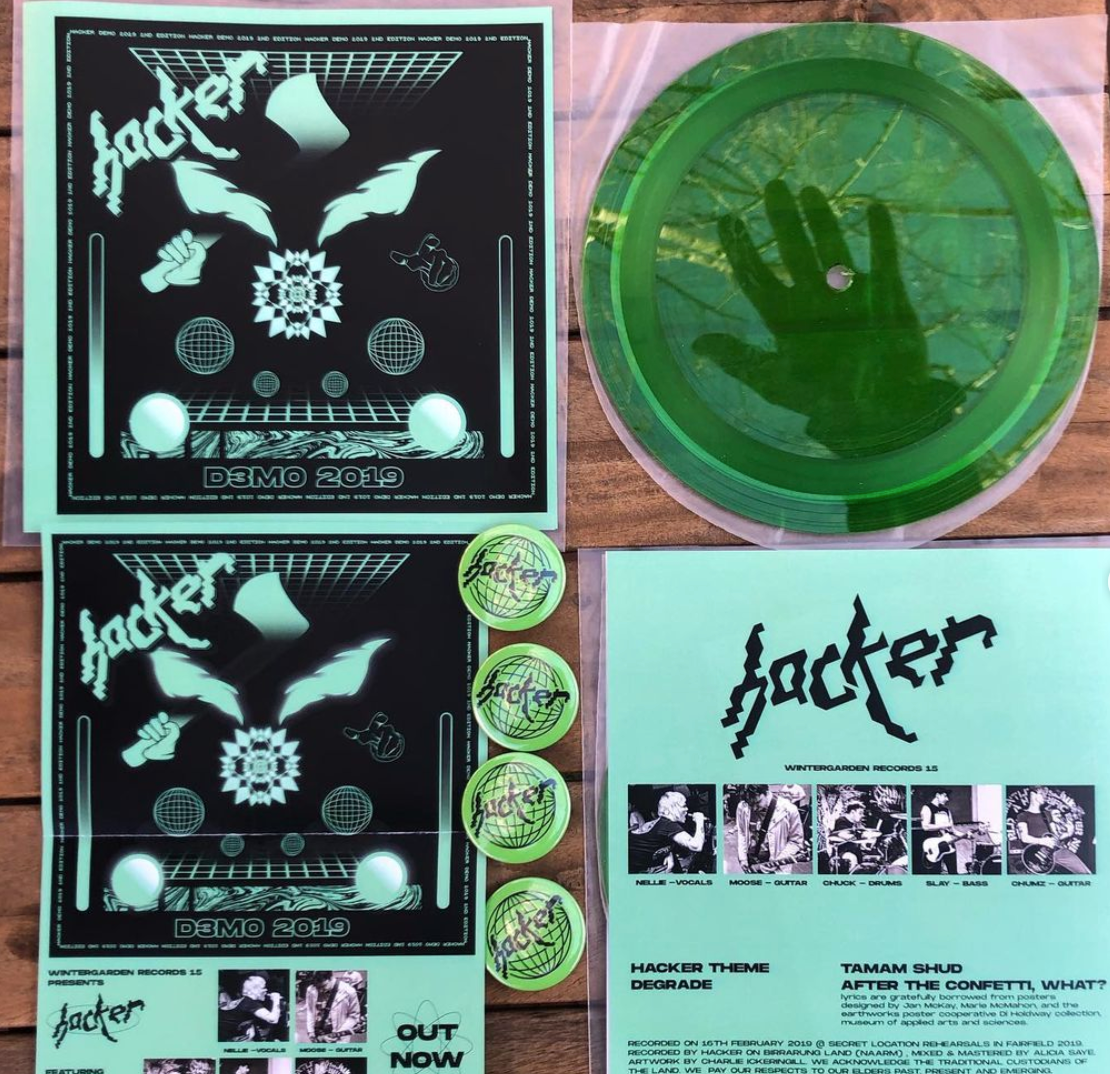 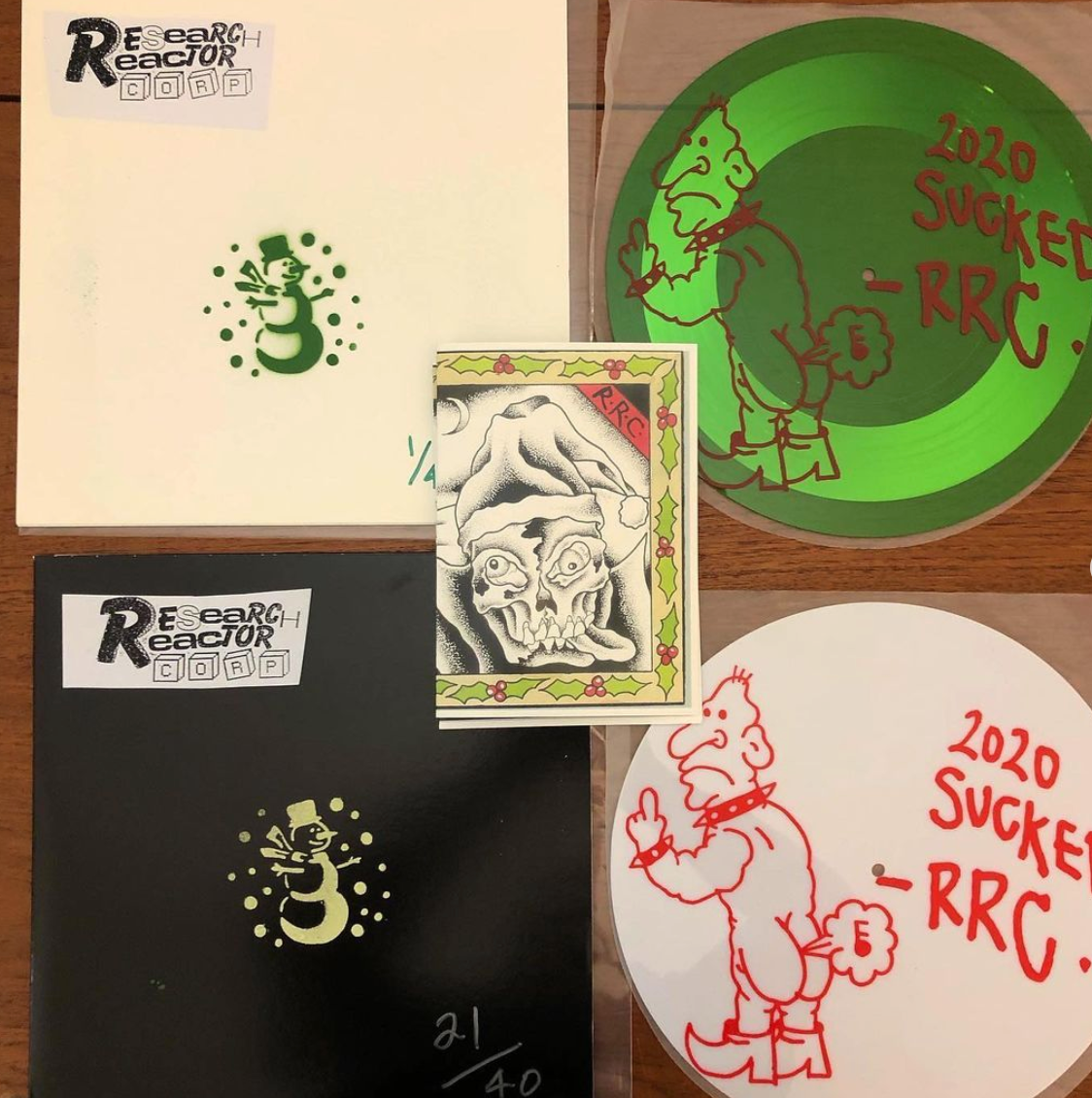